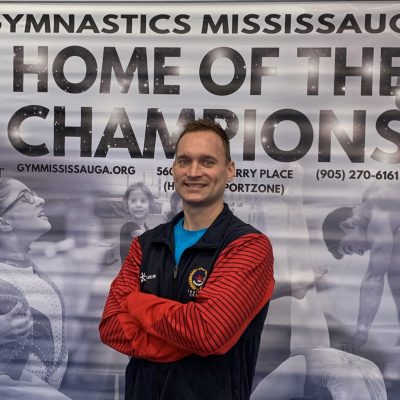 Frank comes with an extensive resume, bringing over 30 years of experience as a competitive athlete and a competitive coach. He started in the sport of gymnastics at the age of 6, was selected to represent his country of Hungary as part of the national team at the age of 13. Frank immigrated to Vancouver, Canada with his family at nineteen years of age and started his coaching career in Men’s Artistic Gymnastics. Within the first fifteen years of his career, he was fortunate enough to help many gymnasts qualify and make the National Teams of Canada, New Zealand, and Turkey.

Frank is a fully certified NCCP coach with many achievements, including Men’s Program Head Coach for over 15 years. He was selected as Team Canada Coach for many major international events, including the Junior Pan-Am Championships in Quebec and Brazil, Pacific Rim in Australia, Youth Olympic Games in Singapore, Commonwealth Games in India, Puerto Cup in Puerto Rico, Pan-Am Games in Mexico, Team World Cup in Germany, the Mexican Open in Mexico and was selected as the Team New Zealand Coach for the Pacific Rim competition in the USA.

Frank has had his athletes participate in many major competitions over the years, including the USA, Russia, South Korea, Croatia, The United Kingdom, Columbia, Hungary, France, Slovenia and Germany, and has received many prestigious awards, including the Stan Wilkes Provincial coach of the year award in 2004 and 2010 and the John Tutte National Level Coach of the year award for 7 consecutive years from 2006 to 2012. Gymnastics is his passion, which he enjoys with great enthusiasm.

We’ll handle your child with care!

Get to know us better!